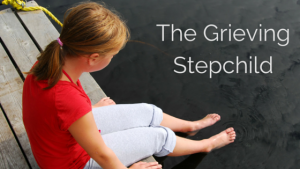 Stepfamilies are typically formed after divorce or the marriage of a single parent who has up to that point raised their child alone or after the death of a parent. By their very nature stepfamilies are born of loss which is grieved in one way or another by all involved.

When the loss is through death it can be especially harrowing, particularly for young children. The age and stage of development of a child at the time of their parent’s death, (and the nature of the death itself), will strongly influence the ways in which a child reacts and adapts. Nevertheless, the grief that accompanies the loss associated with the death of a parent as a child (as opposed to such a loss as an adult) is made more complex by the fact that the child has to integrate this loss into their life as part of growing up and becoming an adult. It can have a permanent effect on a child’s development and their sense of self and of family regardless of their age.

Hell, I was 39 when I had to adjust to living in a world which my mother is no longer a part of. I was a grown up, with life experience. I consider myself mentally stable (well most of the time) and, for crying out loud, I’m a fricken psychologist and it still knocked me for a six.

However old you are, you are never prepared for a world in which the person with whom you perhaps fought and butted heads with, who shaped you and who you loved and relied on for unconditional love and support is gone. Losing a parent is hard. But when you mix this grieving experience with stepfamily dynamics, it can stir up and create emotional turmoil for everyone– for the child dealing with the loss of a parent, for the remaining biological parent, and for the new partner – emotional turmoil which no one expects or is ever truly prepared for.

The reality of stepfamily life is that the ‘other’ parent always has some sort of an influence/impact on your household. None more so in a situation where that parent is not only absent, but deceased. That, my friend, is a whole other obstacle course. When a parent has died, dating, re-partnering or remarriage of the remaining parent may renew or trigger unfinished grieving in children. It can also engender in the child a number and mixture of thoughts and feelings, such as hurt, suspicion, jealousy, insecurity and manipulation. It can bring with it a yearning for the departed loved one, idealisation of the deceased parent and reminders of what has been lost.

At the end of the day it is also another transition for the child to have to adjust to and cope with. A transition that will inevitably result in questions, challenges and/or possibly problematic behaviours associated with the child’s surviving parent having re-partnered. Problematic behaviours and jealousy can be particular issues (especially in primary school aged children and teenagers) if, following the parent’s death, a child has been compensating and has unhealthily assumed a pseudo-parental responsibility for their surviving parent’s emotional wellbeing.

As a stepparent how do you best handle this complex emotional vortex?

There is no simple answer. Grief is a continuum and has many faces. A child’s emotional attachment to a deceased parent continues well after that parent’s death. It is important to accept and understand that the child’s or young person’s grief will also likely be re-experienced, and the loss of the parent acutely felt, at times of remembrance (such as the anniversary of the parent’s death, Christmas, etc) or life transitions (such as birthdays, graduation, leaving home, marrying and having a child of one’s own).

Your stepchildren’s reaction and re-reaction to their parent’s death is a normal part of grief and loss and has little to do with you or the quality of and closeness of your relationship. Don’t take it personally. It is important not to feel threatened by, or to minimize, the reoccurrence of this grief, but to support the child or young person/adult through this new stage of adjusting to life without their parent. Remain mindful that learning how to deal with grief is like coping with other physical, mental, and emotional tasks — it’s a process, not an event, and it inevitably takes time.

In the absence of a simple answer of what to try when dealing with a grieving stepchild, we make the following suggestions:

In the early days of your relationship with your partner, don’t rush your introduction and your presence into his/her children’s lives. Give the children ample space to get to know you as their prospective step-parent – in relation to their world, rather than simply as ‘mummy’s boyfriend’, or ‘daddy’s girlfriend’. Give your stepchildren the space to allow them to get used to the idea of you and of being part of a new stepfamily.
Time – Accept your stepchild’s time scale and that it is inevitably differently paced from your own. A child’s grief can be spread over many years. As we have noted, it may also resurface in adulthood, especially at a time of crisis and/or celebration.

Encourage your stepchild to talk about any fears or concerns they may have about a ‘replacement parent’ being foisted upon them.

Don’t be afraid to talk about the loss and the parent that has died. This gives your stepchildren permission to talk about it too. Listen patiently, when they do talk.

When you can, compliment your stepchildren’s deceased parent’s values and parenting. But be careful not to over-glorify or to run down the deceased parent (or that parent’s family). Children need good, realistic memories on which to build their future.

Children may fear that their parent is being forgotten. Work together with your partner and step-kids to find appropriate ways of honouring the biological parent and help children to ‘remember’ his/her significance. Diane Fromme, the author of ‘Stepparenting the Grieving Child’, advocates that as difficult (and possibly awkward) as it can be, at least two anniversaries each year should not go without recognition in a grieving stepfamily: the deceased parent’s birth date and death date. This shows your respect for that parent and can help demonstrate to the child that you are not trying to take that parent’s place, and honours their grief.

Step-parenting can be hard enough at the best of times, step-parenting in the context of grief can be especially difficult. Be patient and tolerant with yourself. Bear in mind, the deceased parent is not your enemy. And never forget that the death of a parent changes your life forever.

4 thoughts on “The Grieving Stepchild”