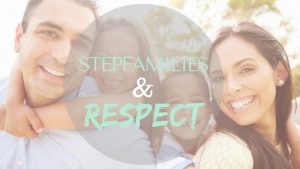 Respect is considered a critical element in any successful relationship. It also goes a long way towards developing a harmonious home. Certainly within stepfamilies the word “respect” is regularly used – you know that old chestnut “you don’t have to love or even like your mum’s/dad’s partner but you do need to be polite and show them respect”. Or how about “Don’t expect your stepchildren to love you, but do expect them to respect you, as you respect them”.

Now these type of sentiments are great and are definitely the right idea. But why, when talking about stepfamilies in particular, is respect so important? And besides being important, what exactly is it and what does it look like?

We all know that love influences behavior. Our love and fondness for other people affects our relationship with them, our behavior towards them and how we relate to them overall. However, love between a stepparent and stepchild is not automatic. It does not just spontaneously appear because you all happen to live in the one home and become a part of the same family. Within stepfamilies love has to be nurtured, tested and retested and it is ultimately a choice for both the stepchild and stepparent. In the meantime, while all this is being played out, those within the stepfamily will occupy the same space and a level of harmony needs to be found – otherwise everyone will be varying levels of miserable.

Against this backdrop the expectation and presence of respect is perhaps one way to influence positive behavior between a stepparent and stepchild when love (for whatever reason) might be absent or is still developing. Respectful behavior is also a way for people (whatever their age) to make a good first impression. This can make a huge difference in the first couple of weeks, months and years, when those faced with the prospect of being a part of a stepfamily are figuring out how they feel about someone or about the situation as a whole.

WHAT DOES RESPECT MEAN?

A quick Google search suggests that respecting someone is generally considered an (often silent) way to express our feelings for them. It is a way of treating and/or thinking about something or someone. It tends to go hand in hand with admiration and having due regard for the feelings, wishes, or rights of others.

In everyday society, when a person shows respect for another, it generally means that the person has some value for that other individual, at the very least because that person is a human being (regardless of who that person is or what they have, or haven’t, done). On the flip side, to disrespect someone is to act in an insulting way towards them. In the absence of respect, there can often be humiliation, contempt, dishonesty, bullying, or a feeling that one is not being heard, is being misunderstood or perhaps unaccepted. Those are some seriously big and unpleasant feelings.

Now if just being a human being is a criterion for respect then stepparents are certainly deserving of it. However, I am not sure that this notion of respecting your stepparent just because they are a person is clearly explained to, or understood by, children who, at the time they are introduced to a (future) stepparent, might still be struggling to adjust to their parent’s separation and holding out hope of their parents reconciling. They may view the stepparent as an interloper or intruder. They may be very resistant to getting to know their parent’s chosen partner and regularly profess a dislike for them. I mean let’s face it, in the beginning at least, a child may hold no value for their stepparent not least because of a lack of emotional connection but also perhaps because of only a brief shared history (developed while the adults were “dating”). Their admiration for a stepparent might be zero. And having due regard for their stepparents’ feelings when a child might be struggling to manage their own feelings, could also all be too hard. This tends to make a stepparent’s role very difficult and frustrating and certainly makes it harder for respect to be easily given and/or recognized – if it is given at all.

In many ways, if respect is both expected and demanded within a family, particularly in those early stages of stepfamily formation, a child showing respect towards a stepparent is probably more about that child showing their parent that they value them, than it does about the child holding value for a stepparent, a person they are still getting to know, possibly under challenging conditions.

Indeed when you think about it, showing a stepparent a distinct lack of respect is a way for a stepchild to express their dislike of the situation and perhaps their resentment, confusion or unhappiness at their changed family circumstances. It is also a way for a child to show a level of loyalty to their other parent. When talking about disrespect however, it is important for stepparents to differentiate between mild rebelliousness and/or naughty behavior e.g. eye rolling, ignoring a question, unable to say hello without prompting or stomping up stairs and complete and utter disrespect e.g. calling a stepparent a home wrecker, stupid or even a bitch.

Whilst all these behaviors can sting and drive adults to the edge of insanity, mild rebellion and naughtiness can be considered developmentally appropriate for certain age groups. Naughty behaviour can be caused by your stepchild testing your and their parent’s reaction to find out what’s allowed or triggered by a change in their environment (e.g. such as parental separation or the parent and stepparent moving in together). Naughtiness can even be down to jealousy or it may be a way to attract a parent’s (or some else’s) attention. Neither mild rebellion nor age appropriate naughtiness is personal (although it sure feels like it at the time!). Utter disrespect is, by comparison, a different story. It is usually more personal, and deliberately hurtful, condescending and/or abusive.

Respect, disrespect and compliance are often issues that become entangled between parents, stepparents and kids

Respect within stepfamilies (as with all families) would also seem to be a mutual thing. It is something that is typically earned and, rightly or wrongly, often must be shown first before it is returned to you. I mean just like we expect children to show us respect, a stepparent should also show the children respect in return. Children are very sensitive towards hypocrisy. Stepchildren are no different. If, as stepparents, we demand respect from them without giving it ourselves, they tend to see right through our insincere behavior, putting up further barriers to us connecting with them in authentic ways. Think about it, if a stepparent constantly rolls their eyes when the ex calls for the umpteenth time when dinner is about to be served, the kids will notice. If they audibly sigh when the other parent is (again) running late to a changeover, the kids will likely pick up on that too.

Children learn respect (or disrespect) from how we, their parents and stepparents, treat them and others (including the children’s other parent). They imitate and reflect back everything we say and do – even when we don’t realize they were watching! When we give others, including our step kids, the same respect we demand we are modeling this important trait. This goes a long way to creating a more harmonious home.

Children have never been good at listening to their elders, but they have never failed to imitate them – American writer James Baldwin

We’d love to here what respect means to you? How do you show respect in your stepfamily? Is it easily given and recognizable?