Now we all have different needs for space, physical and emotional. As we go about our daily life, different spaces (and states) help us to carry out the task in hand or to recover from them. Emotional spaces can be influenced by the physical spaces we inhabit and vice versa. Our needs for these spaces are more often than not a function of our previous experiences in the family we were raised in and all the relationships that come after.

Stepfamily life can put many pressures, stresses and strains on its family members. Just like in any family, the spaces we inhabit can exacerbate (or help alleviate) everyday stressors.  In stepfamilies however, the concept of space takes on a whole new level of significance – not least because spaces that might not have been shared previously, become shared – sometimes willingly, often not. 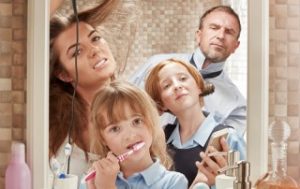 For children in stepfamilies who typically live a life of constant transition as they move and live between two homes, the idea of physical space is understandable. The need for these children (who are part-time residences of two households) to have a space to call their own – a tangible, physical space that can be a separate room or even just a corner in a room is obvious – not least because they typically have two homes, two bedrooms, two beds, possibly two sets of siblings and maybe even two different pets. But aside from those tangible spaces where they sleep, eat, play and physically move between their parents at a changeover, there is also the less recognised, but equally important, emotional space – that abstract, figurative space that exists in the ether between their parents and their two homes.

Emotional space is always there – whether we like it or not.

Emotional space is always there – whether we like it or not. In some instances, it is very obvious. For example, at a funeral service the emotional space might be filled with intense sadness, reverence or subdued thankfulness and people behave and respond accordingly. Sometimes however, emotional spaces are harder to recognise and to make allowances for. You may be somewhere and begin to feel uncomfortable, self conscious, or feel a negative vibe from another person also in that same place. You aren’t quite able to put your finger on exactly what it is that is making you feel that way but regardless, it influences the way you behave and effects your experience of that event/occasion/interaction. Irrespective of whether emotional space is decipherable or not, it is certainly something that not only takes up a lot of space, but also time and energy, either trying to figure it out, managing it or actively trying to avoid it.

For children in stepfamilies (where the parents are separated and have both remained involved in the child’s life) emotional space can have a massive impact on their wellbeing and development, depending on it’s tenor and tone. It can also impact on general stepfamily functioning as well as having an effect upon you, the stepparent.

Think about it. Children “exist” in the psychological/emotional space between their parents. If this space is filled with anger, hostility, resentment or perhaps just cold indifference then you will most like be dealing with a stepchild who may feel very angry, sad or distressed, may not cope so well with change and/or who might experiences divided loyalties. You (the stepparent) may also be burdened by a tired child who, not only has to cope with transitions in the physical sense of moving from house to house, but also in a psychological sense of moving between possibly, two different parents and households and dealing with different routines and rules in each place. You will also more than likely have to manage and support your spouse you may get exasperated, upset or repeatedly frustrated at having to engage and negotiate with an ex-partner who knows exactly how to push their buttons. If the relationship between you and your spouse’s home and the other parent’s home is somehow compromised, that space can also prove to be fertile ground for suspicions, insecurities and mistrust to grow. Talk about fall out.

Children do best when the emotional spaces they live in and are exposed to, are separate from the problems of the adults tasked with loving and caring for them. Whilst they need both parents and their stepparents (if they have them), they definitely do not need the grown-up problems. Ultimately as a stepparent, you (and your spouse/partner) want to do your best to create a benign emotional space between your home and the home of the other parent. You want that space between the two homes to not be toxic or cancerous. You want it to have little or no detrimental effect on the children, on your family and on you.

How can you try to make the emotional space more benign?

There is no easy or miraculous solutions on offer here. But below are some ideas for you to consider trying in the pursuit of benign emotional spaces:

If you create some benign emotional energy flow between your home and that of the other parent, children are less likely to get caught in angry or tearful reactions or in the devastating experience of being asked to take sides in continuing tensions and hostility. Then you can spend less time putting out fires, managing conflict and picking up the pieces and focus all your energies on getting on with the job of raising children in a caring and safe environment.

After all, both stepparents and parents tend to be most effective when they can create a space for the kids to grow and explore their own interests and talents – separate from adult problems and issues and the conflict and hurt that typically accompanies divorce and separation.