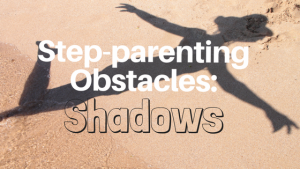 I was reading a book the other day, “Between Two Homes – A Coparenting Handbook” by Bradley S. Craig, specifically chapter three which talks about the obstacles to establishing a successful cooperative, post separation parental relationship. Of the eight obstacles Bradley Craig talks about, there was one in particular that can also be a hidden trap or obstacle to fulfilling the role of being an emotionally healthy stepparent – “Shadows”.

So, who (or what) are those shadows?

Behind (and alongside) each and every parent, co-parent and stepparent lies supporters and distractors, otherwise referred to as “shadows”. Shadows are everywhere. They are the influence that comes from the multiple groups and structures within which a stepparent is nested e.g., social class, culture, family group, friendship group. They are persons that we interact with at various levels and in different ways as we go about our day to day lives. Shadows can know a little or lots about our circumstances or bits and pieces about certain parts of our lives, depending on how we know them and how regularly we (or members of our family) interact with them. 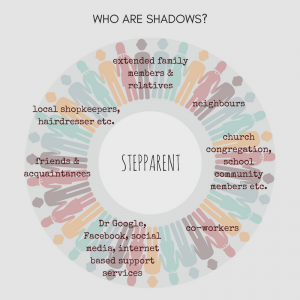 Now, according to Bradley Craig, shadows can be emotionally healthy “ears” or unhealthy “mouths” depending on their words, actions and behaviours.

“Ears” as those shadows who are empathic and actively listen to your praises of, and frustrations with, your spouse, your spouse’s Ex, your stepchild and your stepchild’s other home. Ears however, do not tend to tell you what to think. Ultimately “ears” respect your ability to make your own decisions. But, by way of their comments and behaviour, they tend to encourage healthy behaviour in us as well as encourage us to use our critical thinking skills and problem-solving abilities.

On the other side of the coin are “mouths”. They are the shadows that tell you what to do and (intentionally or unintentionally) encourage conflict between you and your stepchild’s other parent or in your stepchild’s other home or even with your spouse. Whilst “mouths” can be very supportive of you, when it comes down to it they are not usually child focussed per say. Their behaviour and advice often reflects their own struggles with emotional regulation and/or their own inadequacies or emotional wounds. They encourage others to think like they do and act like they do (or would) and usually not in constructive or healthy ways particularly in the context of post separation and stepfamily relationship issues.  Their comments/advice often start with, “I can’t believe you let them get away with …”, “let me tell you what to do…” or “What you need to do is…” or “…this is what I did (to win)….”. It is often emotive and inflammatory in tone, which risks creating or escalating conflict which is ultimately not good for children or the stepfamily. Mouths, by encouraging you to take their advice and by laying blaming those in the other home, often contribute to a victim mindset.

Overall, ears tend to be better at thinking about things from the child’ perspective and encouraging behaviour in a stepparent that meets the child’s needs, (even if sometimes that is at the expense of the stepparent’s needs). They understand that listening empathically does not mean that they necessarily agree with you about the problem (or the cause or any problem). Ears encourage stepparents to be the bigger, stronger, wiser (and sometimes) more mature person, albeit they also readily acknowledge that this often bloody hard!

To try and illustrate the differences between ears and mouths, think about this scenario:

If the parents and the stepparent are all at little Johnny’s Saturday morning soccer game and a sideline conversation between the stepmother and father and Johnny’s mother becomes heated, just as little Johnny comes off the field at the end of the game – clearly not helpful or healthy behavior for Johnny to be exposed to – what should a “shadow” do?

B) remove Johnny if possible, perhaps by taking him over the drink fountain to fill his water bottle up and chatting to him about the game

The answer is B, remove Johnny if possible, perhaps by taking him over the drink fountain to fill his water bottle up and chatting to him about the game, which is something that Ears would most likely think to do. Mouths on the other hand, whilst might also do B, are far more likely do A, C, D E and/or F. 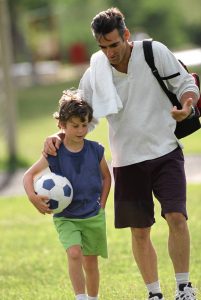 The table below (adapted from Bradley S. Craig, Between Two Homes: A Coparenting Handbook, page 64) summarizes some of the behaviors typically associated with ears and mouths. 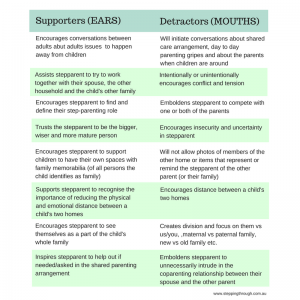 Let’s face it, not only are shadows all around us, we too can be a shadow to others. I think if we are being truly honest each of us has the ability to be both an ear and a mouth. Sometimes we say things to preserve another person’s feelings, to avoid conflict, because we want to fit in.  Maybe we are having a bad day or something about another’s persons situation or behavior triggers something in us that feels emotionally uncomfortable. Being an ear or a mouth or both, does not equate to someone being bad or good. The behaviour of shadows only becomes a problem when, as a parent/stepparent, we allow them to distract us from making a decision or behaving in a way that encourages healthy relationships and/or negatively effects our family dynamics, making the situation more difficult to manage than it already is.

Take a look around you, who are shadows in your world? What support or advice have they given which has been helpful or perhaps not so helpful to you as a stepparent?