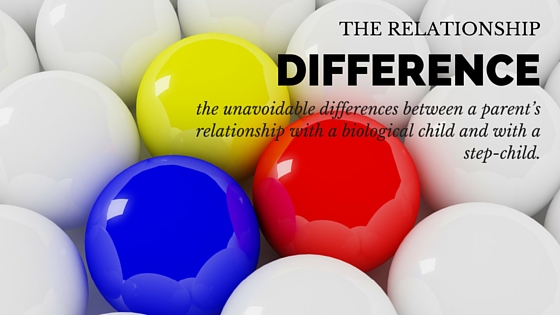 Whilst likeability and attraction can be instant, relationships however do not just appear.

Meaningful and long-lasting relationships and secure attachments between us and others are built, established and maintained over time. Relationships are also by no means static. They can (and will) change and are influenced by time, experiences and life and developmental stages. The reality is that relationships can ebb and flow much like ballroom dancing. Sometimes you’re dancing tango, sometimes you’re dancing the waltz, sometimes you are sitting in the bleachers taking a breather (or perhaps not wanting to continue to dance at all!).

In this way parent-child and stepparent-stepchild relationships are no different from any other type of relationships. They can be sensitive to external factors and take time to become embedded in family life. But the characteristics of a parent’s relationship with a biological child and with a step-child however, can be very different. These differences come about as a result of some unavoidable reasons:

The contrasts between a parent’s relationship with a biological child and with a step-child can be subtle or very obvious depending on a number of factors.

These factors include: whether the stepfamily was formed when the children were infants or minors or when children are teenagers or grown up; the level of conflict or animosity that exists (if any) between the separated parents and also between the stepparent and the children’s ‘other’ parent; the other parent’s support or acceptance of their ex having re-partnered; and the personalities and temperaments of all those involved.

The different characteristics between these relationships, can manifest themselves in daily family life and in the behaviour of family members towards one another in variety of ways.

(excerpt above taken from ‘The Attachment Difference”, Ron L. Deal).

Box 1: Comparison of parent’s relationship with a biological child and with a stepchild

It is definitely ok to want and to aim for a loving, close relationship with your stepchild.

The best way to tackle the differences in the parent-child and stepparent-stepchild relationships is to have healthy expectations about both the time it can take to establish a relationship beyond a superficial level and the nature of relationship you might be actually able to establish. Remember also to let the kids set the pace and not to rush the process (even if their speed it slower than you would like). Expect setbacks and loyalty binds. And above all be willing to persist and keep trying.

1 thought on “The Relationship Difference”