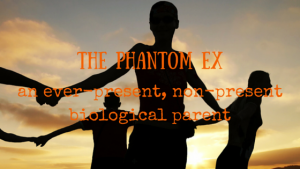 It is a fact that some children’s mothers or fathers are absent from their children’s lives by choice or bereavement.

It is also a fact that some stepparents choose to be a daily presence in these same children’s lives by choice. Despite what others may think, an absent biological parent does not make a stepparent’s role easier. As with all things stepfamily, this type of circumstance comes with its own immense rewards and its own unique challenges.

Google and 95% of stepparent support forums may lead you to believe that an absent Ex is the stepparent jackpot. No co-parenting issues or having to manage a relationship with an Ex, can seem like a dream to many stepparents who are experiencing high conflict co-parenting between their partner and his or her Ex. But that just isn’t the case.

In being nowhere, it can feel as if the absent parent is almost everywhere.

Many times, the children’s non-present, biological parent is an ever-present feature in their minds and their home. Wherever a stepparent walks, especially if they are taking a step towards their stepchildren, they may find themselves bumping right up against the phantom Ex. Stepparents in this situation can feel particularly helpless and at the mercy of something they have no opportunity to confront as if the missing parent is an obstacle that will never be overpassed.

When a parent isn’t present children who are grieving or are too young to comprehend the situation tend to fantasise or idolise him or her.

Creating a fantasy world can help a child avoid the harsh truth – that their parent has left them. Children’s coping mechanisms vary and many may not be able to grasp this harsh reality all at one time. To compensate, they develop an alternative story. One where the absent biological parent is not only perfect, but misses them terribly.

In the child’s imagination the absent parent takes on super-human traits of awesomeness leaving the same-gendered stepparent who is there for the child day-in-and-day-out looking rather…well, mundane. Reality is hardly ever as good as one’s imagination. As the child never actually sees the absent parent, an active imagination can take the place of memories that have never been made. The child never sees the phantom ex without their make-up, after a bad day at work, or grumpy from a bad night’s sleep. The sad fact is they never see him or her at all.

If the child isn’t aware of the reasons his or her biological parents separated, the fantasy they create may also include that separation being at the hands of a wicked stepparent who stole one of his or her parents away from the other. An absent can play havoc on the relationship between a stepparent and their stepchildren. The child’s belief about the absent parent is out of kilter with reality. It’s over-magnified and no matter how hard a stepparent tries, in the mind of the child, the idolised absent parent does all things much better.

As a stepparent, there are two really important things to keep in mind.

It is sad that your stepchild has a parent who chooses not to know or spend time with them and your stepchild is grieving that loss. Even if you and your partner belief your stepchild is better off without the other biological parent in their life, this is not likely to be the way your child views or understands the situation. Acknowledging your stepchild’s sadness, loss and disappointment will eventually allow the child to come to a place of understanding that their parent’s actions are not about or caused by them.

As a stepparent there are some other things you can do to assist your stepchildren in managing the very difficult reality of their situation:

Stepparents play a significant role in the world of their stepchildren. This means you can play an important part in helping the children to overcome the grief, loss and sadness that comes from growing up with an absent parent.