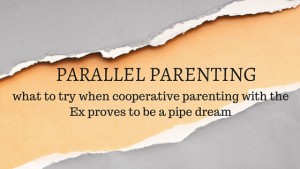 ‘Mutually co-operative parenting’ and ‘shared parenting’ are terms typically used when talking about the gold star type of parenting for separated parents. It implies parents that are able to work together for the sake of their children. That, with the assistance of with time, distance (and maybe even therapy), parents have been able to move through the hurt, sadness, anger and conflict that accompanied their divorce, reaching a point of acceptance that allows them to work together as a team to care for and raise their children.

The post separation reality for some parents, stepparents and children however can be a little different. Sometimes, despite all the best intentions in the world, big challenging emotions, difficult personalities, an addiction to anger, stubbornness and/or a lack of acceptance, mean that co-operative parenting is a pipe dream and an unrealistic goal. So what do you do when a mutually cooperative shared parenting relationship between your partner and their ex is as likely to occur as you suddenly developing super powers to rival Thor, being contacted by Nick Fury of S.H.E.I.L.D and asked to join The Avengers. Perhaps the answer lies in supporting your partner to stop trying to do the impossible. To stop trying to co-parent with their high conflict ex and try, instead, to give parallel parenting a go.

What is Parallel Parenting?

Simply put parallel parenting is a process where parents, parent next to (or alongside) one another because they are unable to parent together. It gets its name from a similar concept in children’s play i.e. parallel play. You know where young children, who do not yet have the skills to interact and play together, instead play side by side, each doing their own thing with the toys and generally ignoring the other.

Parallel parenting is all about the parents disengaging from each other and having limited direct contact. It’s about parents accepting their ex-partner’s right to parent the way that he/she wants to – even if done so begrudgingly. It puts each parent is in charge of the decisions regarding the children when the children are in their care. In this way parental authority transfers from parent to parent as the children move between their two homes. While it does require a level of pre-agreement on key issues such as where the children should go to school, any decisions made in the house of one parent when the children are in their care are not considered the business of the other parent.

There are a number of reasons why you might encourage your partner to give parallel parenting a go. Such as:

The first step is you and your partner letting go of an unrealistic level of mutual cooperation or friendship with the other household. Both households also need to commit to disengaging from each other.

It means stopping talking on the phone or in person so as to decrease the likelihood of being drawn into an argument, of people getting stressed, of things being said in the heat of the moment or misconstrued and then nothing getting resolved. Written contact, email or even text messages rather than verbal communications should be utilised. This is usually less emotional, less prone to misinterpretation and there is a record of what has been said or agreed to. It also helps you and your partner to choose what you respond to and take your time to compose a civil mature response, thereby by removing opportunity for knee-jerk or sarcastic retorts that you might make if you were on the phone.

If your partner’s Ex tends uses e-mails to harass you, have your partner tell them that neither of you will respond and, if the abuse continues, you will stop e-mailing altogether.

There are various websites/apps and online parenting software available for separated parents to communicate such as Our Family Wizard, JointParents, Coparently or 2 Houses. These services, which are internet based or downloadable, keep track of children’s medical, educational, babysitter information, expense logs, photos, the parenting schedule and messages sent back and forth between the parents.

3. Make rules for communication (and stick to them).

High conflict parents tend to ignore boundaries. So you and you partner will have to be very clear about the terms for communication with the other household. Part of any parallel parenting plan should stipulate that email or texting should be used only for logistics: travel plans, doctor appointments and exchanging information about the kids’ emotions and behaviors during the time the children are with them, information about children’s health, school-related issues, the daily routine, and other information about children’s needs that children need their parents to know. There is typically an agreement that emails will be written in a respectful tone, with no criticisms or swear words and, most importantly, NO instructions about how the other person is to parent the children. Write the rules down. Refer to them when you or your partner are composing any messages to your partner’s ex-spouse.

With parallel parenting, each parent should take responsibility to develop independent relationships with your child’s teachers, doctors, coaches and friends so that they don’t have to rely on the other parent for information. Be proactive – attend parent teacher  or information evenings, participate in fund raisers, volunteer to help in the canteen etc.

Because parallel parenting involves minimizing all direct contact between parents, this might mean avoiding being together at child-related functions, (including their sports games) and arranging for handovers to occur at school rather than at your home. When it comes down to it, schedule separate parent-teacher conferences. Trade off hosting birthday parties. Do curbside drop-offs so the children don’t have to feel the tension between their parents or between their parents and stepparent.

Keep clear about what is and isn’t OK with you. For a parallel parenting arrangement to work you and your partner need to know and respect each others boundaries. This is important not only for your self-esteem, but also for how you’re modeling adult behavior. Remember, children watch your every move and are learning tons about being an adult, dealing with conflict and big emotions from both their parents and their stepparents. Make sure you and your partner are teaching them helpful life skills, skills that will last them into adulthood.

7. Try not to sweat the small stuff.

Parallel parenting requires letting go of what happens in the other parent’s home. (Sometimes easier said than done, we know!). Although it may drive you crazy that their mother lets one of the children stay up until midnight (hypothetical example), there is really not much you can do about it. Nor can you control their father’s selection of babysitters, children’s clothing or how much TV time is allowed (again hypothetical examples). Try not to complain when the other parent is five to ten minutes late to a changeover and didn’t text you or your partner to let you know they have been caught up in traffic. Support your partner not to argue over whose turn it is to get little Johnny’s next haircut – remind them that Johnny’s hair will grow back; he will eventually need another hair cut.

8. Support your partner to allow the children to love their other parent and that parent’s family.

Don’t fall into the trap of criticizing their parent to them. It may make you feel better but it will hurt them. Tell your partner to talk to an adult friend or counsellor or even the postman if they need a shoulder to cry on about their Ex.

9. Maintain consistency in the schedule and stick to the Court orders.

This really is best for everyone. When parallel parenting, avoid making one off changes or varying the schedule – this helps to minimize the need for the two households to be in contact with one another thereby reducing the risk of the adults involved being drawn into an argument. It also helps in avoiding miscommunications which, lets face it, often result in increased conflict between two homes.

10. Stay out of problems that don’t involve you.

Do your best to not get involved in problems between the children and their other parent. If Amy complains about something that goes on at Dad’s, instruct her to speak to him directly. If Samuel criticises his mother for not letting him do something, don’t agree with him that his mother is unreasonable, instead encourage him to discuss it with his mother. Trying to solve a problem between a child and their other parent will only inflame the conflict and possibly even teach them to pit the two households against each other. Remember the goal as a parent or stepparent is to guide and empower the children, not teach them that they need to be rescued (from a parent or from life in general!).

Parallel parenting ultimately means letting go of the anger and the fighting. It means you and your partner relinquishing that which you really have no control over – like what goes on in your children’s other home. After all, I believe it was Albert Einstein that defined insanity as “doing the same thing over and over again and expecting different results”. So really, moving on from trying to unsuccessfully co-parent to something else, like parallel parenting, doesn’t mean you have failed as a parent or stepparent. It actually means that you are trying your best to deal with a difficult situation by using flexible thinking to shield the children from adult issues and conflict and to give them a healthy, normal, fun-filled, adventurous childhood. In this context we say to you, well done!