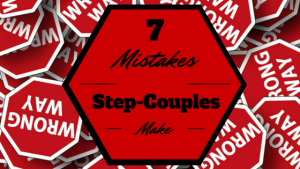 Stepparenting isn’t easy. In fact, it has been found to be one of the hardest types of parenting out there. Because stepfamily circumstances are unique and diverse, many stepparents find themselves learning how to stepparent by trial and error. When the stakes are high, obviously no one wants to misstep or slip-up.  So we’ve pulled together 7 mistakes commonly made by step-couples that you should avoid on your journey to creating a stepfamily and life you love.

It’s exciting to be in love and like most new romances you and your partner will be keenly aware of and in touch with each other – but not so much with anyone else. It is easy for the new step-couple to be so wrapped up in their relationship that they miss or misinterpret a child’s cues that he or she is struggling with the additional changes. With ‘love blinders’ on, step-couples may view the child as ‘resistant’ to or ‘causing problems’ for their new relationship instead of recognising this as a symptom of grief and loss or a difficulty coping with the significant amount of transitions they have experienced in their lives.

Here at SteppingThrough, we do our best to avoid the b-word. We don’t believe that whipping everyone together until you can’t see where the members of your family start or finish should be the goal for any stepfamily. In fact, what works for developing successful stepfamilies is quite the opposite of ‘blending’. The reality is you can’t force togetherness and expect to get a positive outcome. Step-couples are much better off celebrating the differences in their family than striving to be tight-knitted. It is also impossible for a child to be ‘blended’ in two different homes – (i.e. two separate blenders filled with completely different ingredients and contrasting flavours) – and feel completely integrated anywhere. If you want to know more about how trying to blend sets your stepfamily up to fail, check out our post, Blending Sucks, or our article, The B-Word: why the “blended family” label does more harm than good, in a July issue of StepMom magazine.

Many well-intentioned people will tell you that putting the step-couple relationship first is imperative for the success of your stepfamily. And, they couldn’t be more wrong! Stepfamilies, unlike first-time families or adoptive families, have additional relationships with contrasting levels of connection and attachment in their immediate family. All of these relationships need to be navigated at the same time and in different ways. Giving priority to the couple relationship, ignores the needs of children in the stepfamily which differs from what occurs in first and/or adopted families. It really is a case of ‘both/and/and’ – (the couple, the parent/child, and the stepparent/stepchild) – rather than ‘either/or’ – (the couple or the parent/child) – when it comes to stepfamilies. All stepfamily relationships require equal and separate time and attention for your stepfamily to thrive.

The flipside of number 3 is also a mistake. The step-couple that heads into their new relationship with a mindset that the children are the sole priority set their stepfamily up for trouble. Dr William Doherty puts it very eloquently when he states ‘Children first is a starting point for exploring stepfamily responsibilities, not an end point’. Delegating the stepparent to ‘second’ significantly inhibits the ability for any positive relationship to occur between the stepparent and the stepchild. In fact, it drives a wedge between the two setting them on the unintended path to jealousy and competition.

5. Too quick to discipline.

Most adult couples in stepfamilies feel the stepparent should take on a disciplinarian role within the first year of the stepfamily forming. Most stepchildren disagree. In the early years – (yep, that is YEARS not weeks or months) – it is best to let the biological parent maintain primary responsibility for the discipline of their children. Depending on the age of the children when the stepfamily formed, a stepparent may never take on a disciplinarian role with that child. And, that’s okay. You can find tips on managing discipline in stepfamilies in our post, Five Tips for Discipline in Stepfamilies. Dr Patricia Papernow also offers some very sound advice when it comes to stepparent discipline – ‘connection before correction’. Successful stepparents build a relationship with their stepchild prior to taking on any type of disciplinarian role.

Many times biological parents expect their partner to love their children just like they do. This is – well, it’s extremely unrealistic. Biological parents and their children have known one another since the child’s conception and birth. They share an emotional history and attachment that doesn’t exist between a stepparent and their stepchild. A stepparent can’t just immediately jump into a pool of unconditional love because they have moved in with their stepchild. When a nine year-old is having a tantrum, that’s exactly what a stepparent sees – a nine-year-old child having a tantrum. The biological parent of that child sees this as well, but they also see the chubby, little face of the toddler that child once was. Memories of that cute, little toddler spring to mind softening the parent’s reaction to what might currently be completely inappropriate behaviour. Those same connections and memories aren’t immediately available to stepparents.

7. Too many new rules too soon.

One thing that all stepfamilies have in common is that they bring about change. Lots and lots of change for everyone involved not least of all the children. An additional transition can be extremely challenging for children who are still coming to grips with the onslaught of change they experienced following the death of their parent or the separation/divorce of their parents. Implementing a whole new set of rules for these children may just be too much for them to cope with. Many times, step-couples will see a deterioration in the children’s behaviour following that much planned family meeting spelling out the new rules for their new family home. Quite the opposite of what they were hoping to achieve. A stepfamily definitely needs to achieve the sense of ‘we-ness’ that comes with having its own, individual way of doing things. However, the key to getting there comfortably is to go slowly and sensitively introducing small changes over a period of time.

8. Trying to be something other than who they are

Sometimes people feel that taking on the label of stepparent means a person needs to become something different than they already are. A ‘good’ stepparent seems to have become synonymous with being able to ‘blend’ a stepfamily to perfection and become best friends with their partner’s ex. Perhaps this is an attempt to wash away the negative stereotypes (i.e. wicked and evil) that come with the stepparent label. Perhaps it’s due to the media’s love of idolising stepfamilies that look and act just like first families. Whatever the reasons, it’s a mistake. Children love their parents – full stop, and it makes children happy to see their parents happy. Biological parents do not need to change who they are or how they interact with their children because they have entered into a new, adult relationship. Stepchildren feel most comfortable when a stepparent interacts with them just as they are not as someone trying to be something else – like a parent to them or a perfect partner to their mum or dad. The easiest way you can create a stepfamily and life you love is to let go of any and all expectations for your stepfamily and focus on being the best you, you can be.

What are some mistakes you and your partner have made in your stepfamily? We’d love to hear all about them in the comments below.